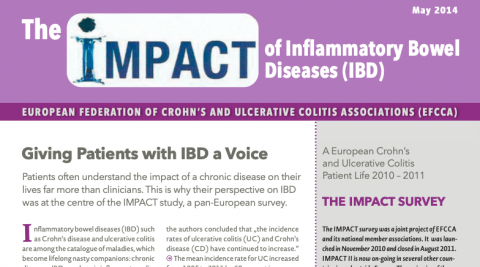 The IMPACT survey was a joint project of EFCCA and its national member associations. It was launched in November 2010 and closed in August 2011.

The main aim of the survey was to obtain an international perspective of the impact of Inflammatory Bowel Disease (IBD) on patients’ lives. Individual member organisations of EFCCA in various European countries were responsible for the launch and communication of the survey to their own members. 4,670 online responses that had been received by the close of the survey were included in the analysis. The survey was supported by an unrestricted educational grant from Abbott.

The survey has received wide recognition from the scientific community and its poster presentation at the ECCO Congress in 2012 was awarded a "poster of distinction ribbon”. It was also published in the Journal of Crohn ́s and Colitis.

THE attachments of this page should also appear here..