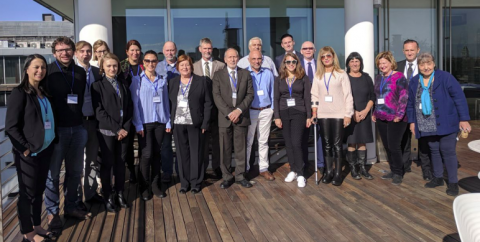 Since about 2015 the issue on biologics and biosimilars has received a lot of attention from the medical, regulatory and patient community. Licensing rights of biological medicines used in the treatment not only of IBD but also other autoimmune modulated diseases are coming to an end and biosimilars medicines are being developed to compete with original biological treatment options. In various countries in the EU and elsewhere biosimilars have already entered the market.

EFCCA understands the market forces that are in place right now and welcomes the idea and necessity of affordable treatment options to be developed. However we believe that under no circumstances should patient safety be compromised. Within this framework and as part of our work programme, since 2015 we have organized a series of events around patient safety and information sharing as well as targeted training sessions to enhance knowledge and skills for people with IBD.

10-11 November 2017, Rome workshop
Delegates from 15 patient associations representing immune modulated disease groups in the Mediterranean area gathered in Rome for  the Patient Advocacy Workshop in order to discuss experiences and local best practice around the issues concerning Biologics and Biosimilars. The workshop was organized by the Global Alliance for Patient Access (GAfPA) in cooperation with EFCCA and forms part of 3 regional seminars that were held throughout this year as a follow up to our main workshop in Barcelona 2016 (see below).   See  Rome_Workshop_Report.pdf

15-16 September 2017, Warsaw regional workshop
The Global Alliance for Patient Access (GAfPA) in cooperation with EFCCA organised a regional workshop on Biologics and Biosimilars which took place on September 15-16 in Warsaw, Poland. Patients, advocates, physicians and health care professionals from 7 different European countries provided their perspectives on the use of biologic and biosimilar medicines. Delegates also shared experiences from the practice of medicine in their own countries. Despite most participants coming from European Union member states, their accounts presented diverse experiences with biologic and biosimilar medicines. The divergence highlighted an important reality: many questions about medicines are still answered at a national level..

Delegates proceeded to discuss how to influence and advocate policymakers at both a national and an EU level and bring them on board about patient concerns. Patients agreed that their voice can be stronger if they work together, particularly when patient groups join forces with organizations of physicians and health care professionals. Delegates also agreed that patients, alongside their physicians, must be central to any treatment decision. Excluding patients introduces the risk of undermining the trusted relationship between patients and physicians, which is fundamental to quality health care.

4-5 May 2017, Munich regional workshop
EFCCA, together with the Global Alliance for Patient Access (GAfPA), organised a Patient Access and Advocacy workshop, which took place in Munich, Germany on 4-5 May and brought together a group of around 10-15 participants from IBD patient associations and related immune modulated disease groups to discuss issues surrounding the access to biologics/biosimilars in the countries represented during the workshop. For more information please read the article on page 6 of the EFCCA Magazine (Issue 2-2017) or download the Munich-Final-Report.pdf

Follow the link below  for more info, full press release, and agenda
https://www.efcca.org/patient-safety-conference-european-parliament

BAB survey
In late 2014 we launched a survey entitled BAB – Biologics and Biosimilars to assess patients knowledge about biosimilars and to find out to what extent patients are aware of the issues involved around biosimilars medicines. The scientific coordinator of the BAB survey is Professor Laurent Peyrin- Biroulet -  from the Department of Hepato-Gastroenterology CHU in Nancy, France.

Read more about the survey: https://www.efcca.org/sites/default/files/jccarticle.jpg

4-6 February 2016, Empowering Patients
From 4-6 February 2016 EFCCA (the European Federation of Crohn ́s and Ulcerative Colitis Associations) together with GAfPA (Global Alliance for Patient Access) organised an advocacy workshop on patient safety which took place in Barcelona and gathered over 60 patient representatives from a wide range of immune modulate disease groups. More info page 5 of the EFCCA Magazine (issue 2/2016)
https://www.efcca.org/sites/default/files/EFCCA_Magazine_%23_16_May_2016.pdf 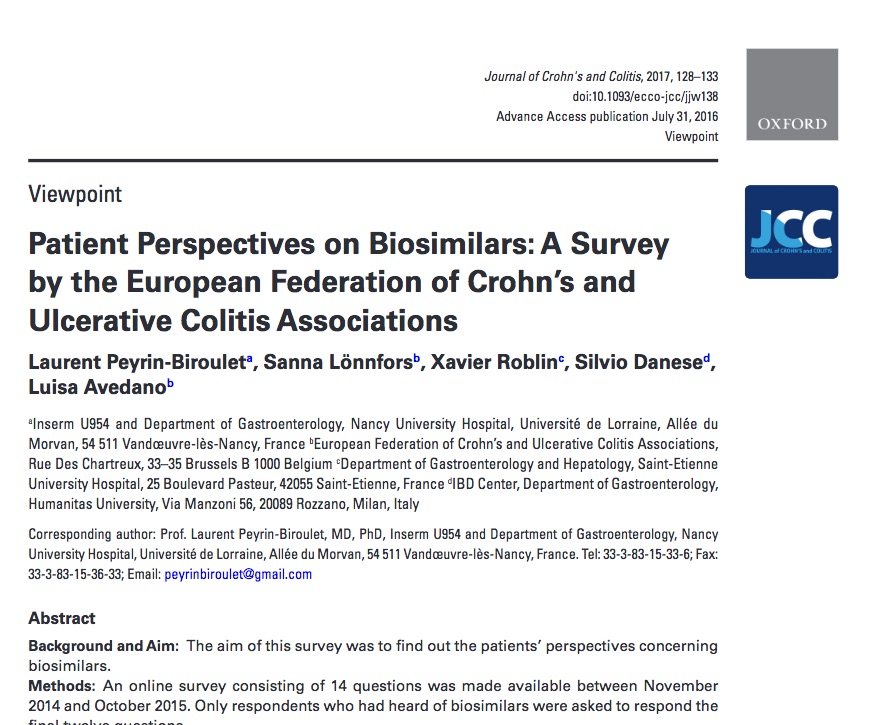