Join the Fight Against IBD 2013

The European Federation of Crohn's & Ulcerative Colitis Associations (EFCCA) and the European Crohn’s and Colitis Organisation (ECCO) have initiated the public awareness campaign “Join the fight against IBD”. Its aim is to enhance the general understanding of the physical and socio-economic burdens of the disease and to accelerate the dissemination of new standards of care of inflammatory bowel diseases (IBD) among health institutions, healthcare providers.

The second event of the Join the fight against IBD campaign took place on February 13-14, in the course of the 8th Congress of ECCO in Vienna (Austria) and focused on the topic:

“Chronic Disease in young people. What does it mean to a teenager for daily life to fight with Crohn’s Disease or Ulcerative Colitis?”

During the global press conference on 13 February, Marco Greco, EFCCA chairman and Daniel Sundstein, EFCCA Youth Group presented the viewpoint of people living with IBD. This was followed by country specific mini press conferences where journalists could interview representatives both from the medical and patient community.

The next day, on 14 February, Marco Greco participated in a panel discussion along with Simon Travis, ECCO president, Dr Rainhold Stockbrugger, chairman of the UEG Public Affairs Committee and Karin Kadenback, Member of the European Parliament. 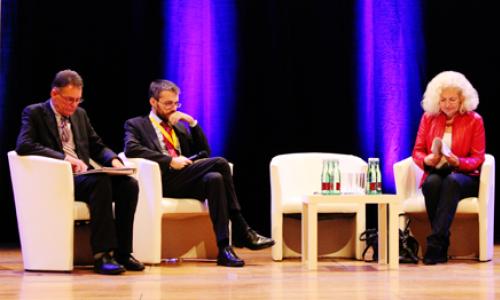 The European Federation of Crohn's & Ulcerative Colitis Associations (EFCCA) and the European Crohn’s and Colitis Organisation (ECCO) have initiated the public awareness campaign “Join the fight against IBD”. Its aim is to enhance the...

Join the fight against IBD Video

We are pleased to announce that our new edition of the EFCCA Academy offering specialized training...

COVID-19 psycho-social impact of lockdown in patients with IBD

“How did the IBD patient community cope with the lockdown?”, “Which is the real meaning of isolation for...

COVID-19 and medicines supply: “Are we running out of medicines?”

This year more than 40 countries across the globe  joined  together in a unified effort to raise awareness about Crohn’s disease and ulcerative colitis in honor of  World IBD Day, held every year...

On 28-29 November a group of people living with IBD and IBD healthcare specialists from 6 countries in the Middle...

In December 2014 the European Crohn’s and Colitis Organisation (ECCO) organised a meeting with IBD Patient Association Representatives and ECCO National Representatives (both nurses and physicians...

In the last two years the issue on biologics and biosimilars has received a lot of attention from the medical, regulatory and patient community. Licensing rights of...

From EU citizenship to IBD-zenship 2013

Conference at the European Parliament,  17 October 2013

“Equal Rights for Citizens with IBD” was the main message emerging from the conference organized by EFCCA in...